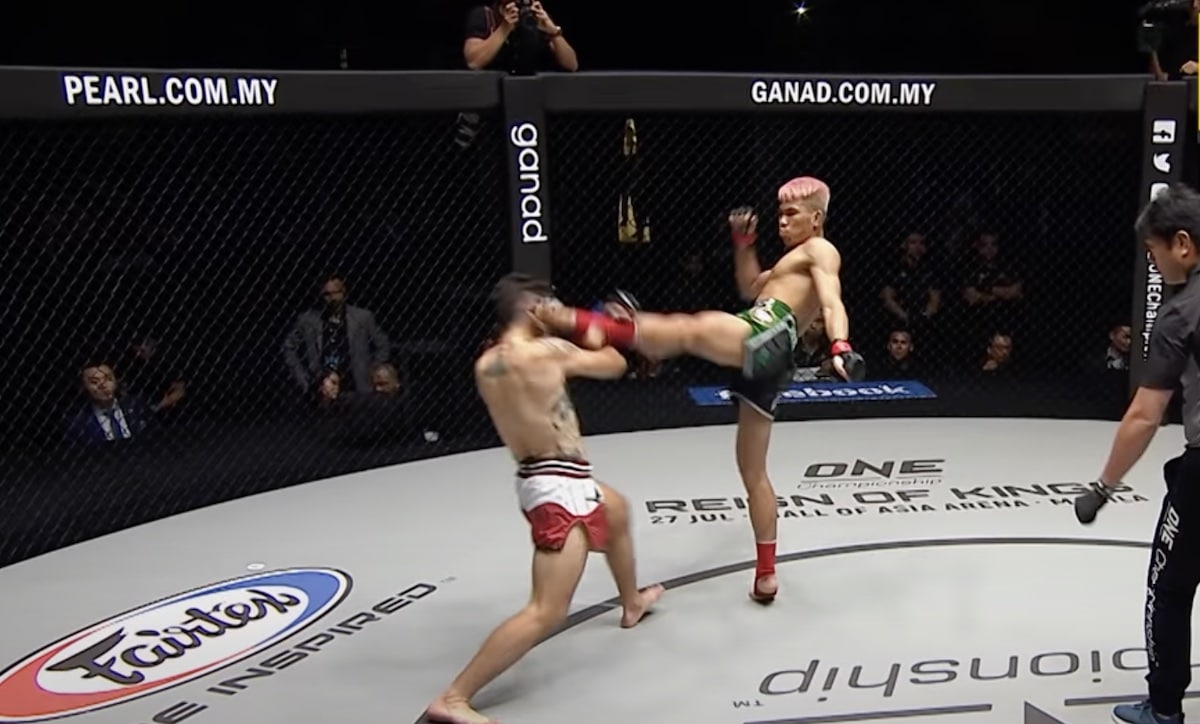 When people think of Muay Thai as a sport they think of vicious elbows and knees, but perhaps more so they also think of powerful kicks and the countless amounts of footage depicting head kick knockouts throughout the years of competition in the Bangkok arenas Rajadamnern and Lumpinee.

From the world famous Buakaw Banchamek to the devastating Yodsankalai Fairtex the Muay Tae has been a staple Muay Thai style in the world of the “Nak Muay” (Thai Boxers) and this article will look deeper into the style and how it’s practitioners utilise their preferred weapon to deadly effect.

What is a Muay Tae?

Simply put the Muay Tae is a Muay Thai practitioner who’s favored tool is the roundhouse kick, which they deploy liberally to great effect. The roundhouse itself has been shown to be the most powerful of the weapons in a Nak Muay’s arsenal, delivering crippling leg kicks, debilitating body kicks and of course highlight reel head kick knockouts.

Muay Tae fighters spend the majority of their Muay Thai careers optimizing their kicks to generate outstanding amounts or power through the horizontal axis, crushing ribs and delivering concussive impacts. This is achieved through rigorous, repetitive and consistent training. kicking pads, the heavy bag and sparring partners for countless hours to perfect the timing, precision and execution of their favored technique.

Although known for their kicking prowess the best Muay Tae fighters are more than just their right and left legs. They will utilize all techniques available to them in order to set up a crushing kick, this can come in the form of a punch combination to get their opponent to drop their guard at the opportune moment or bait a kick which they can check (shin block) and counter with rapid efficiency.

Strengths of the Muay Tae Fighter

The Muay Tae like the majority of Muay Thai styles have a similar base in the core ideals of Muay Thai, more forward and deliver the more impactful strikes throughout the course of  the bout. However the styles strategy varies in it’s approach to that of say a Muay Mat (Heavy Puncher) this approach of course starts at the range in which they choose to fight; The Muay Tae will generally prefer to fight medium to long range, setting up roundhouses with teep kick (thai push kicks), punches and footwork, choosing to either move forward and apply forward pressure or sit back and wait for an opening before delivering one of their trademark techniques.

The main strength of the Muay Tae is obviously their fast and powerful kicks, matching up well against most styles of Muay Thai fighters from the Muay Plam (clincher) to the previously mentioned Muay Mat. In order to close the distance with the Muay Tae these closer ranged fighters will be forced to walk through a barrage of brutal Muay Thai kicks, if unchecked can break ribs, butcher legs and incapacitate. However if checked, not only do they slow the pressuring fighters forward momentum; but they can also fracture bones as famously seen when Apidej Sit-Hirun broke both of Sompong Charoenmuang’s arms in their legendary contest.

When a Muay Tae fighter enters into a Muay Thai bout, as is tradition in Thailand they will begin at a slow pace for the first round usually standing in front of their opponent getting a feel for their opponents distance and firing off occasional kicks to “test” their adversaries guard and adjust their timing accordingly. Moving into the later rounds the Muay Tae will increase their output and usually following every combo, change in distance or change in positioning a powerful kick will be delivered.

Should one of these kicks land another will follow, this continues until the opponent disengages, manages to close the distance or counters, it is not unheard of to see a Muay Tae fighter end a fight with upwards of 5 unanswered kicks as their opponent scrambles to find a way to prevent the attacks. In order to stay at “kicking range” the Muay Tae will utilize fast lead teeps (thai push kicks) and powerful rear teeps to maintain the distance, using these momentum killers to set up further kicks while keeping them out of danger from the closer range fighting styles.

Weaknesses of the Muay Tae Fighter

By now the Muay Tae fighter most likely sounds like an unbeatable avatar of violence with their perfectly timed kicks and efficient aggression, however this is not the case; the Muay Tae while matching up favorable against many styles of Muay Thai,  can be a double edge sword with the same styles that struggle against them also having an advantage if they can move forward into close range to nullify the effectiveness of the long range kicks.

The fighting styles that can be a problem for Muay Tae fighters are Muay Plam, Muay Mat and Muay Femur.

The Muay Plam; when fighting a Muay Tae will attempt to catch their kicks using this trapped appendage to leverage themselves into clinching range to grapple and slow the Muay Tae fighter, delivering close range elbows and knees to great effect.

The nature of the Muay Tae’s straight forward approach to fighting can lean into the tricky fighting style of the Muay Femur allowing them to set traps for the power kicks to counter, score then disengage before the follow up attack comes. A risky game to play to be sure but one that has worked extremely well for a number of Muay Femur’s such as Saenchai and more recently The ONE FC champion Superbon.

Perhaps the most difficult style for a Muay Tae to face is the Muay Mat, their relentless forward pressure and brawling heavy hands can prove to be very challenging for even the most skilled of Muay Tae. This conflicting style has become more apparent recently with many western kick-boxers clashing with traditional Thai fighters on international fight shows.

The Muay Tae fighters fire off powerful kicks and the punchers will check the kick with the arms (a very common Kickboxing practice) exchanging this impact for the advancement of position; stepping into range to deliver some crushing hand combinations. A perfect example of this would be the 2019 fight between Yodsanklai Fairtex and Jamal Yusupov, with the Russian fighter Yusupov finding success in the first round by walking down Yodsanklai and throwing a volume of effective punches before in the second round finding a home for his right straight and left hook, following up to drop Yodsanklai to the canvas twice, forcing the ref wave the contest off scoring an impressive win against one of the all time greats.

One could argue that no other Muay Thai style has as many advantages while at the same time having as many disadvantages competing against other Muay Thai styles as the Muay Tae fighter which makes it one of the most exciting styles to watch, which can clearly be seen looking at the myriad of fighting footage from legendary Muay Tae such as Singdam O Aukritt,  Sakmongkol Sithchuchok or the southpaw killer Yodsanklai Fairtex.