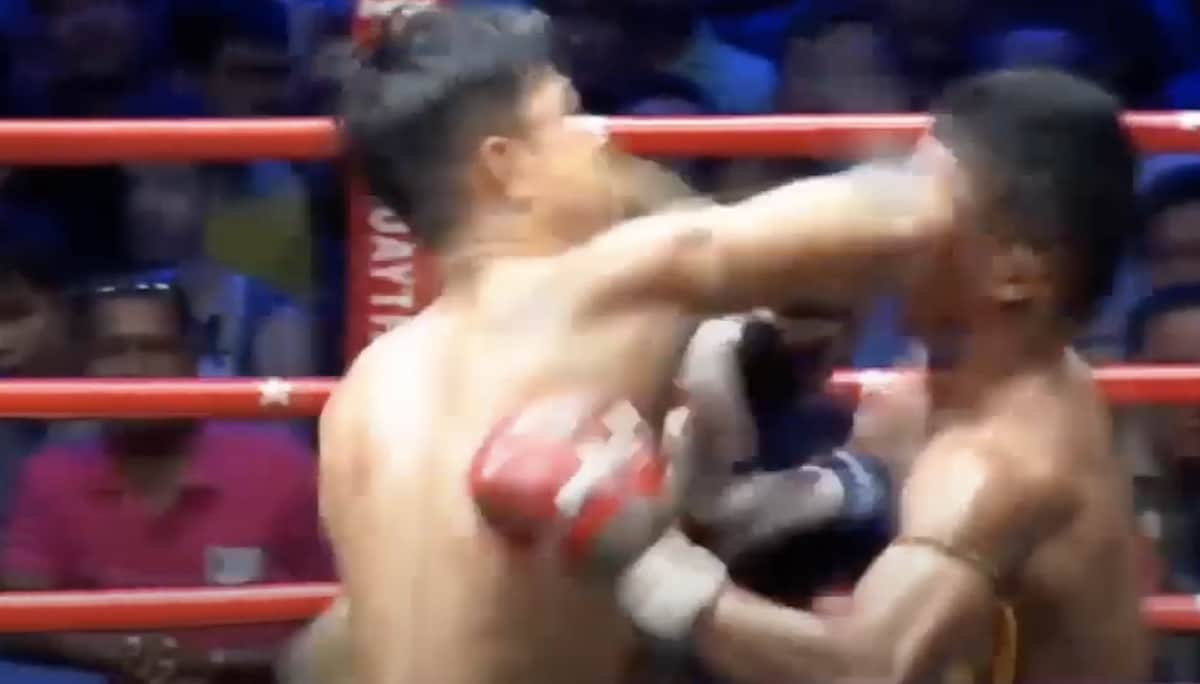 Elbow Strikes are synonymous with the incredibly effective striking art of Muay Thai. It is actually a discipline within the martial art known as Muay Sok where the Nak Muay deploys a mix of devastating elbows to fight his opponent.

That is why we put together this complete list of all of the Muay Thai elbow strikes. Complete with their Thai names, how to throw these Muay Thai elbows and their purposes.

The sok tee or sok for short is a rotating elbow strike. It is one of the most basic types of Muay Thai elbows that works very similar to a hook punch. Primarily used to break through an opponent’s guard, who is being more defensive.

How to throw the sok tee(rotating elbow)?

The mechanics for throwing the sok tee elbow work similar to how a hook is thrown in boxing. You take a step forward, turn your foot slightly in, along with your shoulder, and elbow at the same time.

A sok tee rotating elbow can be thrown with both arms and can be used in a variety of different Muay Thai combos.

The sok tad or sok tat is a horizontal elbow strike that is one of the most used Muay Thai elbows. It goes straight across from one shoulder to the other, generally targeting the opponent’s eyes and nose.

How to throw the sok tad(horizontal elbow)?

The sok tad horizontal elbow can be thrown with both arms and is thrown across your body. You simultaneously turn your elbow, shoulder, hips, and aim to hit with the tip of your elbow.

The sok ngad or uppercut elbow is one of the most diverse strikes of the Muay Thai elbows. It can be used as both a counter and an offensive attack coming forward towards your opponent. Attacking the nose and chin of the opponent.

How to throw the sok ngad(uppercut elbow)?

A sok ngad elbow is thrown exactly like how you would throw an uppercut punch with either hand. Your hips, shoulders, and elbow slightly turn in, then finish the strike by bringing your elbow towards the opponent’s face. This elbow strike can slide between the opponent’s guard or breakthrough them at an upward angle.

A sok poong elbow is similar to the sok ngad elbow, but is thrown more like a spear than an uppercut. It’s called the spear elbow, because you drive your arm forward like a spear to the nose, forehead, and collar bones.

How to throw the sok poon(spear elbow)?

The motion of the sok poon spear elbow begins with you raising the tip of your elbow up next to your face. You take a jab step forward with your lead foot and thrust your elbow towards your opponent’s face or collar bones.

The sok klab is the Thai name for the spinning elbow used in Thai boxing. It is one of the most powerful Muay Thai elbows within the martial art. You can also use various types of elbows within the spin depending on what your objective is.

How to throw a sok klab(spinning elbow)?

You can use three different types of elbows within the sok klab, but the footwork is the same for all three. It’s called a spin, but you’re actually just turning your body 180 degrees.

This spin/turn starts with turning your lead foot slightly in. When you make this slight turn inwards, the rest of your body follows through, adding more speed/force to your elbow.

The sok tong is the downward-smashing elbow that is commonly thrown in Muay Thai elbows.  Its motion is very similar to how you would use a hatchet to chop a bit of wood. This vicious elbow targets the top of an opponent’s head or onto their clavicles.

How to throw the sok tong(downward smashing elbow)?

The motion of a sok tong smashing elbow is just like how you use a hammer or a hatchet. You raise your elbow and drive it directly down onto the opponent’s head or shoulder.

The sok sub is the Thai name for the downward chopping elbow. It is similar to the sok tong smashing elbow, but instead of smashing, this elbow is designed to chop your opponent. Using either arm to deliver a cutting blow to your face or their forehead.

How to throw the sok sub(downard chopping elbow.)

To throw the sok sub, the mechanics are very similar to the sok tong elbow. But instead of delivering a smashing blow, you throw a chopping blow that is designed to cut the opponent. Raise your elbow up to the sky and chop it downward as you turn your hips and foot inward.

The sok chiang is a diagonal elbow strike and is one of the more unique  Muay Thai elbows. Coming at a 45 degree upward angle across your body. It is designed to strike around the eyes and nose of an opponent.

How to throw a sok chiang(diagonal elbow)?

To throw a sok chiang elbow, you have to slightly turn your foot, shoulder, and hip together simultaneously. Your lead foot turns to throw your front elbow and your back foot turns in to throw your back elbow. Both going up and across to strike at your opponent’s face.

The sok wiang klap is the Thai name for a reverse horizontal elbow. This is one of the more unorthodox Muay Thai elbows in the martial art. It can either be thrown off a missed or fake horizontal elbow and even a hook punch.

How to throw a sok wiang clap(reverse horizontal elbow)?

The mechanics of a sok wiang clap or reverse horizontal elbow are the exact opposite of a traditional horizontal elbow. Instead of turning your front foot or back foot in, they turn slightly out along with your hips and shoulder. It’s an untraditional strike that the opponent will not see coming.

The sok kratung is a sneaky Muay Thai elbow that is thrown upward of a missed or fake horizontal elbow. This is the same type of elbow strike that Anderson Silva famously used in his fight against Tony Fryklund.

How to throw a sok kratung(upward elbow)

This elbow strike is masked as a fake hook or cross punch. Turning both your foot, shoulder, hip, and shoulder inward to chamber your strike. Then as the opponent comes forward, you turn your body back outward, and drive your elbow up into turning.