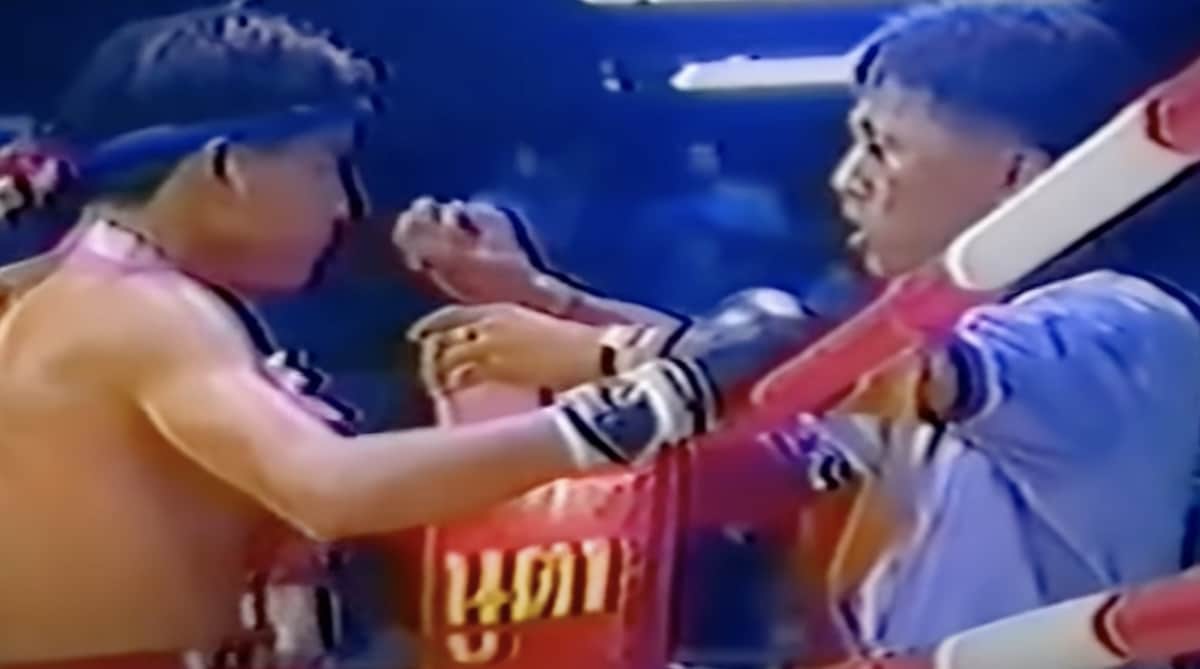 One of the definitive features of Muay Thai that separates it from western kickboxing is the use of elbow strikes. These strikes are used liberally in short-range to deliver “bladed” impacts to the face and head to cut the face and incapacitate via knockout.

No other fighting style employs these strikes as liberally as the Muay Sok, choosing to step into close range battling past kicks, knees and punches to land successive elbows of varying techniques to great effect.

A perfect embodiment of the Muay Sok style and ideology is the legendary golden age fighter  Yodkhunpon Sittraiphum affectionately known as the “elbow hunter of 100 stitches” who became a champion in both Lumpinee and Rajadamnern stadiums. Despite his many accolades and being known as possibly the greatest Muay Sok in the history of Muay Thai Yodkhunpon Sittraiphum perhaps was better known for always leaving his opposition needing stitches regardless of the bout’s result regardless of whether he won or lost his fights were always a gritty, bloody test of endurance for his opponents.

What is a Muay Sok?

The direct translation of Muay Sok in the Thai language is elbow fighter, The Muay Sok fighter focuses on fighting in the shortest of ranges, with the overall aim to close distance rapidly usually by checking kicks and stepping forward while the opponent is off-balance to deliver elbows in rapid succession, overall their fighting style is very aggressive using footwork and pressure to cut the ring off from their opponent and walk them down forcing the fight to be fought at the range that suits The Muay Sok style the best.

The Muay Sok deploys a number of elbow techniques such as but not limited to:

The Muay Sok fighter will use these different elbow strikes to varying success at different ranges and positioning, for example, the Sok Pung or “Spear Elbow” is a fantastic tool to follow a “fake teep” with the Muay Sok using the omentum of the feint and raised leg to propel themselves forward and throwing the Sok Pung with precise aggression, aiming for the brow of their opponent. Or they might use the Sok Ngat when engaged in the clinch to slip through the center of the guard to strike the chin while maintaining the posture and arm positioning to defend effectively.

Strengths of a Muay Sok

The most obvious strength of a Muay Sok fighter is the ruthlessly aggressive pressure that they bring to any fight, the elbow being unpadded and used in tight and efficient slashing motions serve as not only a dangerous weapon but a means to intimidate their adversary, making them think twice before throwing punches or kicks this hesitation can force an error which will allow the Muay Sok fighter to capitalize on the brief lapse of judgment and step inside and to begin their onslaught.

Another strength of a Muay Sok fighter is the ability to freely move when engaging in close range, because they choose to throw a limited number of knees and kicks they have the opportunity to move in shorter sharper steps laterally to create angles for cleaner strikes, a common example of this would be to throw a jab followed by a step in Sok Tat (horizontal elbow) to block the opponent’s vision, then circle out to their favored side before firing a second elbow usually a Sok Ti to the side of the head bypassing the guard.

As the Muay Sok chooses to throw predominantly elbows they conserve considerably more energy than say a Muay Tae (power kicker) or Muay Femur (technician) who throws high energy kicks in abundance, this conserved energy can be unleashed in the later rounds in a barrage of short-ranged cutting elbows.

The Muay Sok, matches favorably against Muay Mat fighters (power punchers) because the similar range of the Muay Mat allows the Muay Sok to engage at will with their elbows, often countering the jab of the Muay Mat with a parry followed by a quick step in Sok Ngat, or slip the straight/cross punch and fire off a Sok Klap (spinning elbow) adding the opponent’s weight to the strike in devastating fashion.

A perfect example of the overwhelming aggressive pressure of a Muay Sok and its brutal efficiency would be the bout in May 2022 on Thai fight between Saiyok Pumphanmuang  Vs Jordan Watson which saw the Thai natives’ forward pressure overwhelm the British former world champion, leading to a gritty and drawn out pummelling over the course of 3 rounds.

Weaknesses of a Muay Sok

As with any Muay Thai style the Muay Sok has its strengths that run both parallel and opposite to its strengths. The Muay Sok’s need to close distance and fire of elbows can be taken advantage of by a skilled Muay Femur, making this a very interesting clash of styles with whoever can implement their strategy the best usually coming out on top, this can be seen in the two fights between Chanajon PK Saenchai and Saiyok Phumpanmuang with each scoring a knockout victory over the other, Chanajon with a high kick and Saiyok with an elbow.

The fighting style which provides the most unfavorable match up for the Muay Sok is the Muay Khao, Which also tends to prefer fighting in close ranges however they are able to throw mid-range strikes in the form of slightly longer range knees at distance where the fighter will be unable to counter with an elbow, and should the Muay Sok step forward and engage in the clinch the Muay Khao can lock up the arms and still throw knees, which in traditional Thai scoring outpoint elbows.

The Muay Sok style is one of the most exciting forms of Muay Thai to grace the arenas of Thailand throughout the years with legends like Yodkhunpon Sittraipum Sak Kaoponlek leading the charge. Additionally, with the recent COVID regulations putting a temporary (now ended) restriction on knees in Muay Thai in Thailand, we saw a shift in tactics with many Muay Khao fighters choosing to adapt to a more elbow oriented approach, this increase in elbow use, the knockouts that followed and the excitement that came with it will most likely lead to the Muay Sok style being more prominent in the years to come.