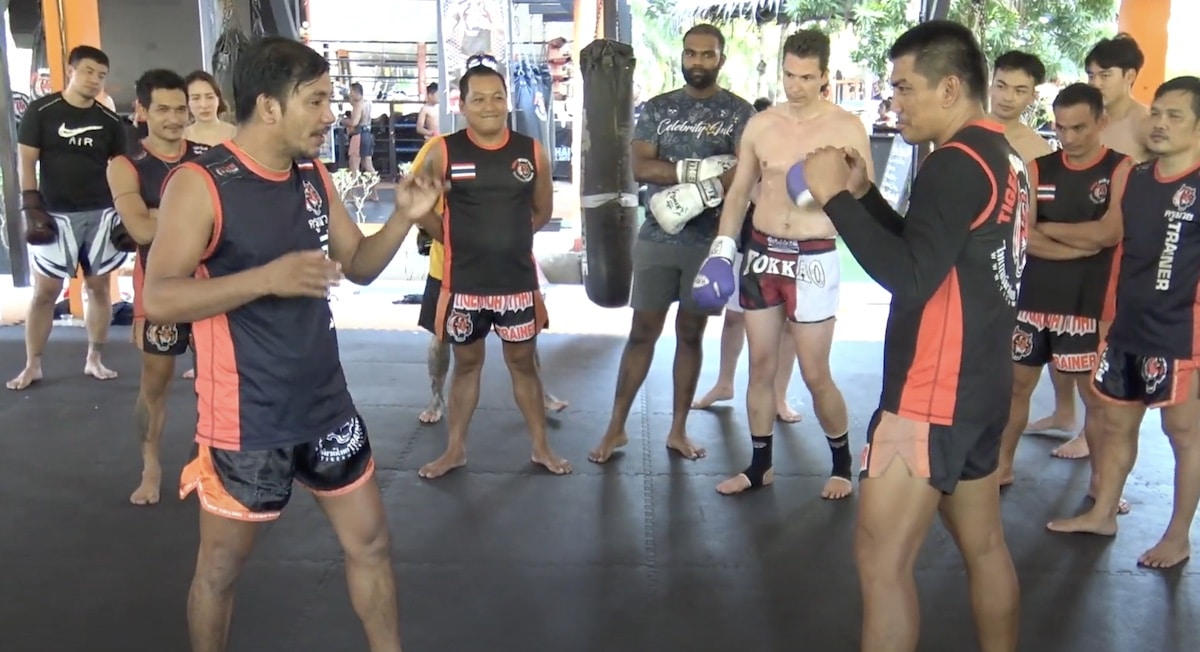 How many Muay Thai techniques are there?

Punching is primarily associated with boxing, but it’s also one of the primary Muay Thai techniques. Thai boxing teaches many of the same punching techniques as traditional boxing with a few extra types of punches. Here is a list of all of the punches that are used within Muay Thai.

The jab is the set up punch for nearly all Muay Thai techniques, just like it is in boxing. It’s a snapping strike that not only sets up your Muay Thai combos, but also measures the distance to your opponent.

The hook punch is also used in both boxing and Muay Thai, where it is known as the “Mat Wiang San.” A powerful punch that hooks across the body and can be used with both your front and back hand.

A cross or straight punch is known as the “Mat Trong in Muay Thai. Just like in boxing, the cross is one of the strongest punches that is thrown with your back hand.

The uppercut is known in Muay Thai as “Mat Soi Dao.” A powerful punch that comes from below and cuts upward towards your opponent. How it is taught in Muay Thai is very similar to how it’s taught in traditional boxing.

In Muay Thai, the overhand or haymaker punch is also taught and is called the “Mat Wiang Yao.” The punch thrown with your backhand that loops up instead of straight like how a cross is thrown.

Then the last type of punch that’s taught in Muay Thai is the superman punch or “Kradot Chok.” The punch that we often see in MMA, where you leap at your opponent like Superman to land a punch.

We went over Muay Thai elbows in a previous write up, where we broke down how to throw each type. They’re Muay Thai techniques that are a vital part of the martial art.

The horizontal elbow is the standard elbow strike within these Muay Thai techniques that’s called “Sok Tad” in Thai. It can either be thrown as a slashing or smashing strike, depending on what your objective is.

The spear elbow is like the jab of the elbow strikes in Muay Thai. To throw it, you step forwards and throw your front elbow and jab it forward like a spear.

A downward smashing or tomahawk elbow is a devastating elbow used with your back arm. Designed to smash a hard elbow strike down on top of your opponent’s head.

An uppercut elbow or “Sok Ngad” as it’s called in Thai is thrown almost exactly how you throw an uppercut punch. The big difference however is that you hit your opponent with the intent to cut or KO them.

A Sok Kratung or upward elbow is the strike that Anderson Silva made famous. It’s masked as an horizontal elbow, then chambered and thrown outward and upward toward your opponent.

Kicks are one of the Muay Thai techniques that the martial art is most known for. There is a wide variety of Muay Thai kicks and many of them are quite deadly.

Roundhouses or round kicks are one of the Muay Thai techniques that most people are aware of. They are incredibly powerful kicks, where you drive the bottom of your shin into your opponent’s body.

Front kicks or teeps are some of the most versatile Muay Thai techniques in the martial art. They have numerous purposes from using them as a jab, push to make space, or deliver a knockout blow.

Sidekicks are taught in Muay Thai, but they are vastly different from what you see in Karate or Taekwondo. A Muay Thai sidekick is thrown straight from the floor and isn’t chambered like in the other martial arts mentioned.

Another type of teep kick that is one of the strongest is the jumping push kick or “Kradot Teep.” This type of teep is where you jump straight at your opponent and hit them with a front kick or push kick.

The axe kick is an incredibly powerful kick that is commonly used within Muay Thai. Throwing your foot straight up into the air and driving your heel down onto your opponent.

The wheel kick is another type of kick that is thrown in most striking martial arts like Muay Thai. You create force off a spin to hit your opponent with your heel.

Clinches are Muay Thai techniques are the grappling facet of Muay Thai that take years to properly learn. There are a wide variety of different types of clinches that each have their own purpose.

The standard Thai plum, collar ties, or clinch is where you’re controlling your opponent’s head with both arms. Grabbing the back of their head with both hands and breaking their posture down to land knees, punches, and elbows.

A single collar tie is where you’re holding and your opponent’s head with just one arm. Your other arm is blocking your opponent’s other arm from either defending or striking. Almost the same as what’s used in wrestling, but with strikes involved.

The over/under is the common starting position in Muay Thai, where fighters battle for position. Either trying to set up their elbows, knees, and also sweeps from this position.

Double unders are another type of clinch that is used in both wrestling and Muay Thai. You’re controlling your opponent’s body with both of your arms under their arms. Using this position to land body shots and set up sweeps.

Throws and sweeps are one of the most important Muay Thai techniques that new Thai boxing fans know about. Thai boxers will routinely throw their opponents to the ground with the clinch or off defending kicks.  There are quite a few different types of throws and sweeps, but here are some of the most common ones.

The most basic Muay Thai sweep is the clinch sweep, which is used when your opponent tries to clinch. When they come forward, you grab their tricep, cup their armpit.

Using the tricep grip to pull and the armpit grip to push your opponent to complete the sweep. While doing these motions with your arms, put your knee on the side of their knee to knock them off balance.

A sweep from head and bicep control consists of pushing the arm and pulling the head. As you do both of these movements simultaneously, you knee the inside of your opponent’s knee to knock them off-balance.

A common foot sweep can be done from head and bicep control or double bicep control. Pull your opponent forward as you connect your shin and foot to knock them off-balance.

The dump is where you take your opponent down as you go into the over/under position. Pushing with your underhook, pulling with your overhook, and blocking their knee with yours as your momentum goes forward.

Another push and pull sweep, but this type from the over/under position. Pull your opponent’s lat down as your other arm cups their armpit to take them down.

From a full clinch, you Gable grip your hands together and put your head under their chin. You’re going to use that clinch to pull your opponent as you turn out to finish the sweep.

Then of course, you have the easy sweep that comes off catching your opponent’s kick. After you catch the kick, you step in and kick your opponent’s base leg out from under them.

Another sweep from the over/under position is the knee tap sweep. You push up with your underhook arm as your other hand pushes your opponent’s outside knee inward.

Probably the most important Muay Thai techniques are the defenses. It’s easy to know how to throw strikes, but you must know how to defend against them.

Parrys are used in Muay Thai, just like boxing to block straight punches, but also some elbows. Both of your hands are up and ready to block strikes and redirect them.

Blocks are where you hug your head or body to block, punches, elbows, and kicks. Holding them tight to absorb the impact of your opponent’s strikes.

Checks are the defense to block an opponent’s roundhouse kicks to your legs. You do a check by turning your knee slightly to catch your opponent’s shin on your shin or knee.

Then, of course, you can defend certain kicks from your opponent by catching them. Usually, the types of kicks that you can catch are roundhouse kicks to the body or front kicks.