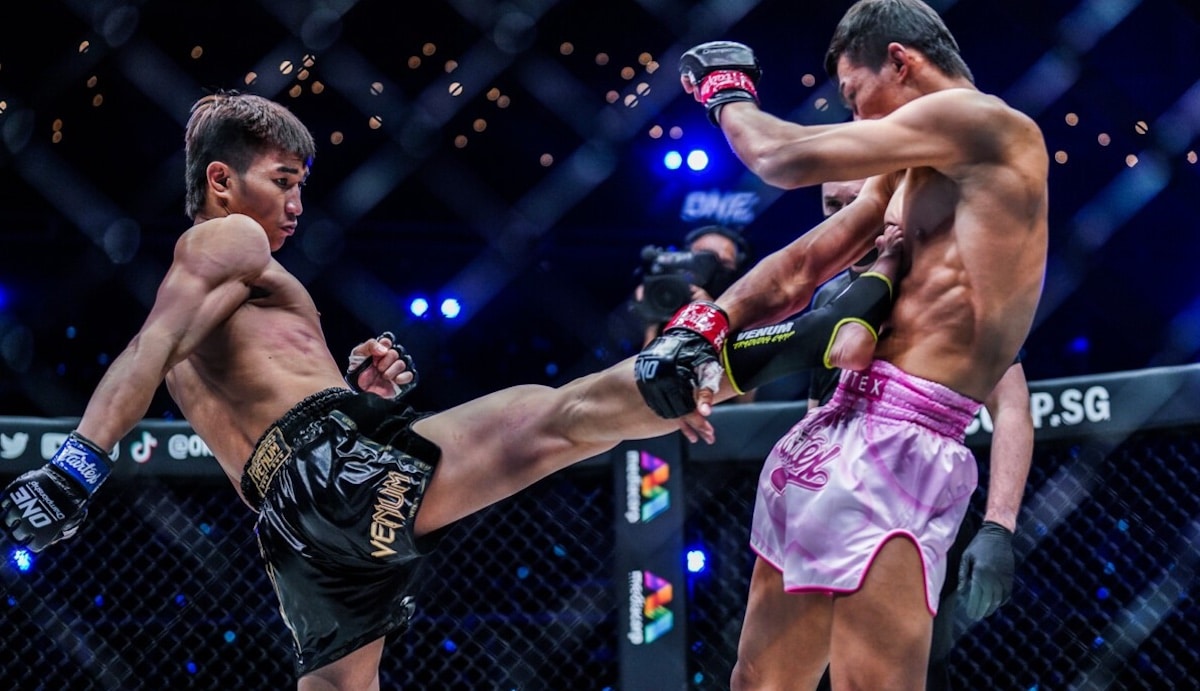 Muay Thai kicks are some of the most powerful kicks in all of the martial arts. The martial art teaches a wide variety of different kicks that are extremely effective.

Here is a list of all of the types of Muay Thai kicks that are used in the martial art. Complete with details on how to throw Muay Thai kicks and videos to see how they are thrown.

Of all of the Muay Thai kicks, the one most associated with Thai boxing is the roundhouse kick. In Thai, the kick is referred to as the tae tat and is the most known kick of the martial art.

It’s the most powerful of all of the Muay Thai kicks. You can use both legs to throw roundhouses and attack the head, body, and legs.

How to throw a roundhouse kick (tae tat)

You then bring your back knee up and turn your hips as you drive the bottom of your shin into your opponent. If you want to land your kick to the body or head, you have to raise your knee up higher.

How to throw a lead leg roundhouse

A lead leg roundhouse has similar mechanics to a normal roundhouse with one extra step. That is you have to switch your hips to make your back foot your front foot. This switch allows you to get more power on your roundhouse kick.

In Muay Thai, a front kick is referred to as a teep kick or just ‘teep’. Two particular types of these Muay Thai kicks are called teep tops and teep trongs. Teep trongs are a foot jab front kick and teep tops are push kicks used to knock your opponent off balanced.

How to throw the foot jab (teep top)

The foot jab or teep top is a front kick that is primarily used to set up a combo or counter your opponent. You start by raising your knee up and extending your foot towards your opponent. Landing with the ball of your foot to either their body or face.

How to throw the push kick (teep trong)

A push kick or teep trong has the exact same movements as the teep top. The only difference is that you land with your entire foot and instead of striking, you push your opponent off balance. Opening them up for a combo of your choice.

Karate and Taekwondo aren’t the only martial arts that use a sidekick. A sidekick is also one of the most popular Muay Thai kicks that are used within this striking art.

It is referred to as a side teep by many within Muay Thai. You can either throw it offensively or off a missed/fake round kick.

How to throw the Muay Thai sidekick (tae tad)

The Muay Thai sidekick is thrown a bit differently than in Karate or Taekwondo, where it is more known. It starts similarly as you turn your back foot slightly out and lift your knee up. You then step forward, turn your foot horizontally, and hit your opponent in the body.

To get more power on their Muay Thai kicks, Thai boxers will often mix their kicks with jumps. The kradot teep or jumping push kick is a common variation of a teep. Masking your kick as either a knee or roundhouse before you jump into your opponent with  a powerful teep.

How to throw a jumping push kick (kradot teep)

You throw a jumping push kick off of a fake kick with your lead leg. Really selling by lifting your lead knee up to make your opponent take the bait and defend.

When they defend, you jump straight at them as you lift your back knee and land your push kick. Hitting them in either the face or chest.

The tae chiang or what many call the question mark kick has become one of the most popular Muay Thai kicks. This kick is masked as a front kick, but then redirects into a roundhouse kick that is quite tricky.

How to throw the question mark kick (tae chiang)

But in the last second, you change the angle of your kick, you turn your hips and foot over. Driving your shin at a downward diagonal angle at your opponent.

The axe kick is also commonly used in Muay Thai, where its Thai name is the tae khao. Next to the roundhouse, the axe kick is one of the most powerful Muay Thai kicks. This powerful kick seems like a roundhouse, but is redirected upwards and is driven downward onto your opponent.

How to throw a axe kick (tae khao)

The axe kick can be thrown with both legs and starts with you turning your hips and swinging your leg inward. You then redirect your kick straight up into the air and drive your heel directly onto your opponent. Targeting either the top on your opponent’s head or their shoulder blades.

The tae klab lang is more commonly known as a spinning back heel kick or wheel kick. It is another incredibly powerful Muay kick that is also commonly used in Taekwondo.

How to throw a wheel kick (tae klap lang)

The wheel kick starts with you turning your front foot in and turning your body inward. You keep turning your body to pick up speed and lift your back leg and hit your opponent with your heel. A very powerful kick that can create quite a bit of force behind it.