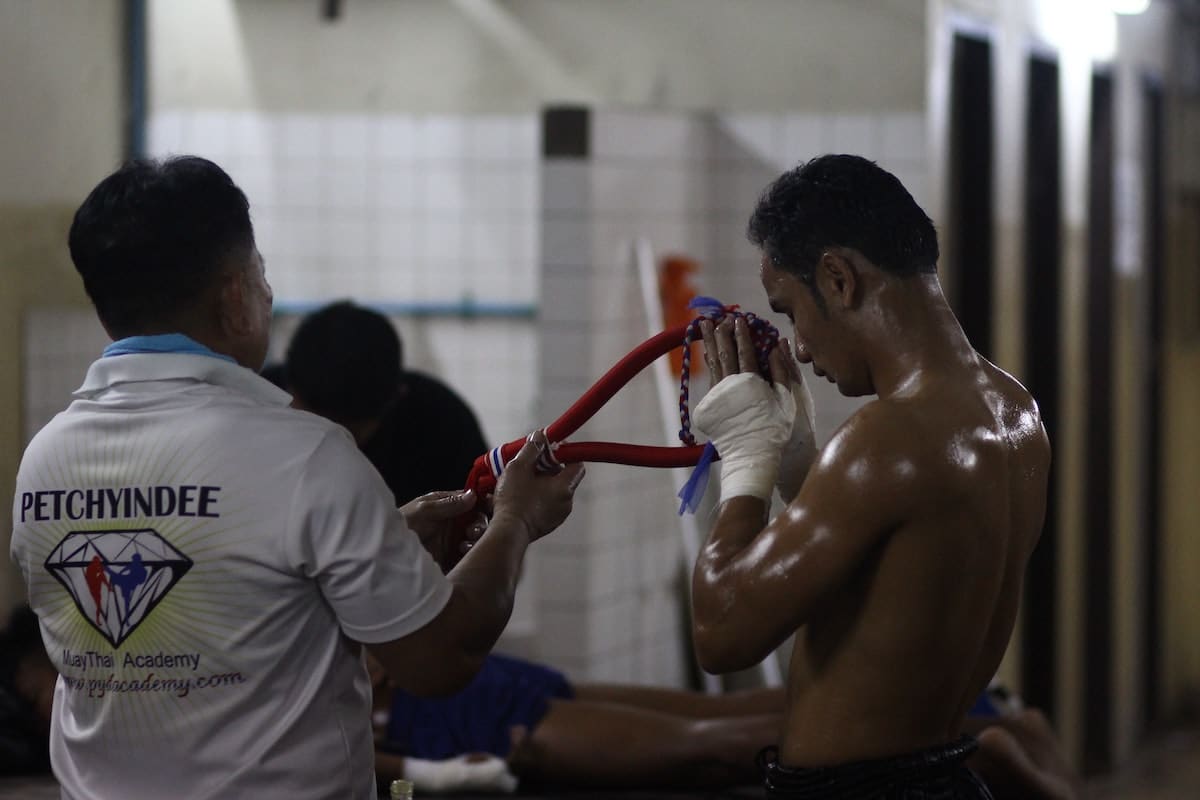 The history of Muay Thai begins in the motherland of the sport, Thailand. The ring sport developed out of martial arts in Southeast Asia. As the countries grew so did their use of fists, elbows, knees, and kicks.

According to legend, the celebrated Nai Khanom Tom helped pioneer Muay Thai. A soldier of Siam in 1774, he was taken hostage by the Burmese. The neighboring country pillaged Ayuttyah and in doing so took Nai Khanom Tom and others, prisoner. The king of Burma wanted to test his countrymen’s fighting abilities. He pitted them against the Siamese soldier. He bested 9 of the Burmese, taking them out with the trademark weapons of Muay Thai. The king granted Nai Khanom Tom and his fellow soldiers’ freedom. And so the sport began to grow.

It was during the reign of Rama V in 1868 that the art developed as a sport. The king of Thailand held regular boxing events. These shows would be some of the first Muay Thai contests.

With the blessing of the king, Muay Thai bouts gained in popularity. During the reign of King Rama VI the sport became even more organized. The groin guards were worn by the boxers. Gyms and training camps standardized. In 1921 the first Muay Thai stadium was established.

In 1941 Rajadamnern stadium began construction. The venue is the oldest in the capital of Thailand, Bangkok. By the time Rajadamnern opened its doors in 1945 Muay Thai was fully developed as a ring sport. Athletes no longer wore khaad cheuk, or ropes, around their fists. They wore western style boxing gloves. Boxers were divided into weight classes and ring rules applied.

The Thai Army constructed Lumpinee in 1956, a decade after Rajadamnern. The two stadiums were responsible for the boom of Muay Thai occurring in the 1980s and 1990s.

At the time the Thai economy experienced a massive boom. The economic growth outpaced any other country in the entire world during the late 1980s and early 1990s. The Gross National Product quadrupled between 1970 and 1990.

This led to a massive influx of the rural population to Bangkok. In turn more fans went to see the sport at Rajdamnern and Lumpinee.

Muay Thai experienced a Golden Era which ran with the economic explosion. Athletes began to receive hefty paydays. Fighters such as Samart Payakaroon, most active between 1980-1988 earned 350,000 baht per bout. Previous top level fighters, such as Apidet Sithirun, active between 1961-1970, received only 85,000 baht per fight.

The stadiums were roaring, the economy was doing well and shows sold out at Lumpinee and Rajadamnern.

Then the economy began to wither. Thailand fell into an economic recession that saw many of the late Golden Era fighters, such as Jongsanan Fairtex take a hit to their purse. The Woodenman, earned 120,000 baht per fight during the height of his career between 1991 and 1995.

The economic slump and an increase in entertainment choices led the main audiences leave the stadium. The gamblers, a large part of the sport, stayed. The fights turned toward the retained audience. The sport developed a more working class reputation.

While Muay Thai in Thailand slowed, it exploded on the international scene.

Several years later John Wayne Parr performed in the land of smiles. Training with golden era legend Sangtiennoi, John Wayne Parr was voted Best Farang Fighter of the year in 1997. He performed for the King’s Birthday and like Dekkers fought at Lumpinee stadium.

Attention turned to Thailand and in 2004 The Contender Asia series began. The reality show starred Muay Thai athletes John Wayne Parr, Yodsanklai Fairtex, Bruce Macfie, and Dhzabar Askerov. Athletes were pitted in weekly contests and fights. The finale saw Yodsanklai Fairtex take on John Wayne Parr. The south paw fighter took out the Australian on points. Coupled with the rise of the internet Muay Thai began to develop as more than a niche market sport.

Within Thailand athletes like Petchboonchu FA Group, and Saenchai PK Saenchai Muay Thai served as staples in the stadium scene. A growing number of Thai fighters were getting international opportunities. Rungravee Sasiprapra, Sagatdao Petchpatayai, and others all traveled outside of their homeland for bouts. They both fought in the States for shows in Los Angeles.

Retired Thai boxers began to resettle abroad. Fighters such as Jongsanan Fairtex trained foreigners in their homeland. This created a stronger connection between the lands abroad and Thailand.

A growing number of foreigners traveled to Thailand and stayed for long periods of time. Liam Harrison, Damien Alamaos, Toby Smith, and George Mann developed strong careers in Thailand. When they returned they brought back a tremendous amount of experience and connection.

As the sport began to appeal internationally, new entertainment shows sprung up. Rather than the traditional five round bouts, these fights were only three. Athletes began fighting right from the opening bell.

Max Muay Thai set a precedent for these shows. Run weekly out of a stadium in Pattaya Thailand, the fights emphasized action. Performance bonuses were handed out to boxers that performed well, win or lose. The new style of show updated lights, sounds, and LED sound systems. Max created a weekly format pitting foreigners against Thais.

Other shows such as Muay Hardcore, MX, and Superchamp followed suit. Changes were made to their formats to differentiate themselves from Max. Fighters wore smaller MMA style gloves, (Muay Hardcore and MX) and female fighters participated.

Before female athletes appeared mainly in the smaller countryside shows. There were occasional televised bouts but small purse sizes, a lack of career paths, and few opportunities pushed most female fighters into early retirement. The new entertainment shows have pushed women’s Muay Thai. This coincides with a larger trend in women’s fitness.

Access to the internet opened up sports tourism. Gyms such as Tiger Muay Thai and Fairtex, opened up for athletes to have sports vacations. Foreigners began to come to Thailand in droves to indulge in the sport, culture and fight.

Other opportunities pushed both women and the sport further. Large federations such as IFMA (International Federation of Muay Thai Associations) drive Muay Thai with regular competitive amateur games held around the globe. Specifically, IFMA is aiming to get the science of eight limbs into the Olympics.

The World Boxing Council of Muay Thai, a non profit established in 2004, is targeting growth as well. The federation serves as quality control for title fights. It is hosting its first youth games later this year. It joined forces with the Tourism Authority Of Thailand to promote sports tourism.

Muay Thai is exploding in the last few years with the rise of organizations such as ONE Championship. Champion Muay Thai fighters large paydays and receive an equal amount of exposure.

The martial art has developed tremendously from its humble beginnings and is looking to become a dominant sport in the future.