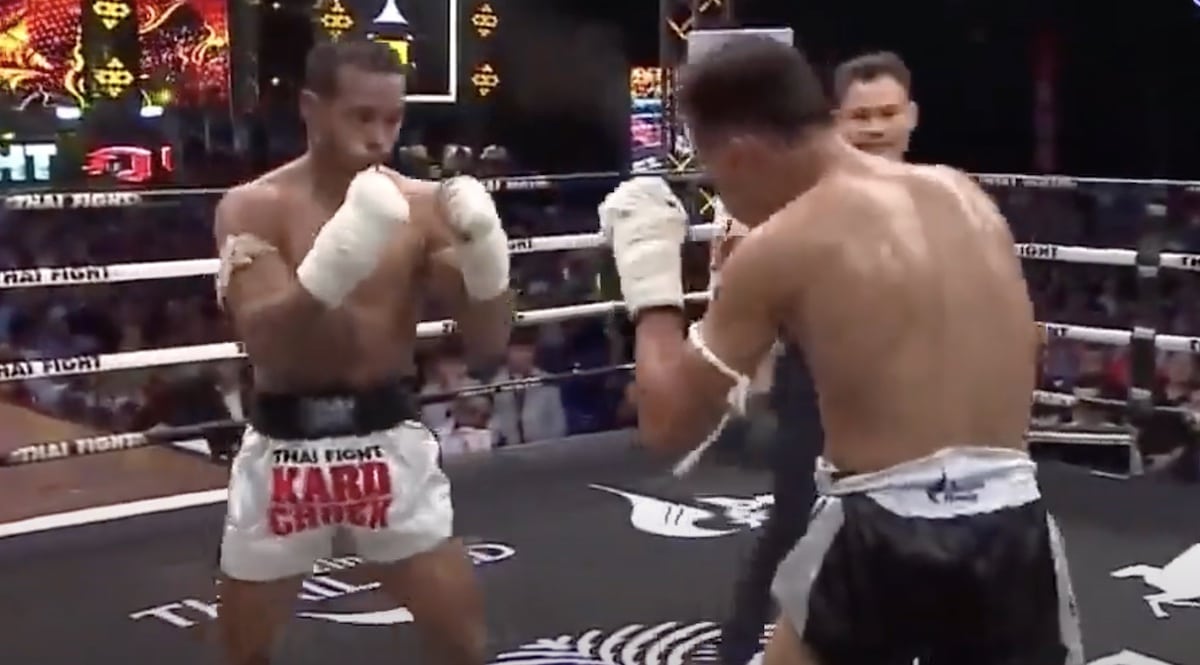 Before the sport of Muay Thai that we see today shown across the world, televised in franchise events like ONE championship and Lion fight, before the echos of cheers and the clashing of shins, before the glory of Rajadamnern stadium and titles in the hallow halls of Lumpinee, there was Kard Chuek.

Kard Chuek (Thai: คาดเชือก) which translates to “rope-bound boxing” is a form of combat, with roots deeply buried in the ancient martial art of Muay Boran which served as the predecessor for Muay Thai boxing. The fighters would engage in bouts of violence with their hands tightly bound in rope, from their knuckles through their wrists up to their elbows.

During Kard Chuek fights, The combatants have their bodies as their only weapons, they would; much like modern Muay Thai deploy elbows, knees, punches and kicks, with Lethwei fighters allowing for headbutts.

It’s clear to see that with the removal of the standard 10oz boxing gloves and the addition of the traditional Muay Thai ropes that the intensity of the fights, specifically the brutality of punches exchanged increases, however, this increase does not take away from the tradition and its innate elegance.

The fighters will still perform their Wai Kru, a dance to honor their teachers, mentors, and training partners with the particular steps of the dance being passed down from trainer to student for generations dating as far back as 800 years ago. This dance has a secondary purpose to bless the fighters with protection as well as allow them to stretch and become comfortable in the ring before the fight commences.

The Muay Thai ropes hold a level of religious significance to the Thai people with people believing that the ropes once consecrated by a monk will become sacred with fighters choosing to dry their Muay Thai ropes in the sun in order to prolong their life, however served a secondary purpose, the sun drying the ropes would cause them to harden becoming tough and rigid, adding to the potential damage to their opponents in the following fights.

With the introduction of padded Muay Thai gloves with their smooth surface and protective padding came the introduction of a more leg dominant style of fighting. This change can be seen when a fighter who predominately fights standard Muay Thai bouts chooses to test themselves in a fight using Kard Chuek. Immediately apparent in these fights is the change in strategy, a large portion of these fighters choose to adjust their fighting style to a more “Muay Mat” style or power puncher, pressuring their opponents and delivering flurries of punches.

The Kard Chuek ropes, much unlike the modern boxing gloves while still protecting the hands and bracing the wrists, do not aim to protect the fighters from the impact but in fact; when tied in a traditional style will serve to inflict more damage, delivering more forceful impacts as well as being significantly more likely to cut following a successful strike.

The Kard Chuek not only increase the damage of punches by reducing and thus the propensity for throwing them, but the smaller amounts of padding means that the protection offered for defending strikes is reduced, leading to more gaps in the defending fighters guard, allowing punches that would normally be blocked slip through the guard to deliver their concussive payload.

This decrease in guard leads to a shift in not only offensive but defensive tactics with fighters moving away from a traditional “shelling up” defense and instead of reaching out to either parry the incoming punches or to engage in the clinch to stifle the punches ability to fully lean into their strikes.

Muay Thai today requires fighters to wear protective boxing gloves ranging in weight from 6oz to 10oz the lightest of fighters typically using 6oz and the heavier fighters using 10z. The use of gloves in Muay Thai came into common practice In 1928, following the tragic fight between Phae Lieng Prasert and a famous Cambodian Khmer boxer. The fight was called off in round three when  Phae Lieng Prasert downed his opponent with a brutal combination of punches.

Unfortunately, the Cambodian fighter passed away on the way to hospital after the fight, following this the Thai Ministry of Interior introduced a ban of Kard Chuek with boxing gloves having to be used for any further contests, while this law has been enforced occasional bouts of Muay Kard Chuek could still be found throughout Thailand in the last century, predominantly in smaller festival fights.

This changed however in 2013. Feeling that the tradition for rope gloves and the art of Muay Kard Chuek had diminished into relative obscurity only being seen in small rural fights, Muay Boran demonstrations and in media in films such as Ong-Bak and Western movies like Kick-boxer which sadly would often depict the tradition in a negative light.

The Muay Thai organization Thai Fight went about adapting the rules and modernizing the sport culminating in the reintroduction of Kard Chuek, using a significantly safer approach with softer ropes made of rattan or cloth to slowly repopularise this dying part of Thai culture.

The Driving force for modern Kard Chuek, Thai Fight has displayed some of the best contests of rope bound Muay Thai in over a century, with greats like Yodsankali Fairtex and the GOAT Saenchai displaying their skills, with western legends like the renowned female fighter Sylvie Von Douglas and former world champion Jordan Watson also putting themselves to the test. The latter of which Jordan Watson’s fight against Saiyok Pumphanmuang is a perfect example of the change in ferocity that comes with the Kard Chuek and the repercussions that come with it.

Kard Chuek’s relatively recent revival under the banner of Thai Fight and its popularity both in and out of Thailand showcasing its brutal and often bloody fights, combined with its allure to young fighters who wish to test themselves in the purest form of Muay Thai has ensured that traditional rope bound boxing matches will continue into the future with the traditions steeped in Thai culture along with them.