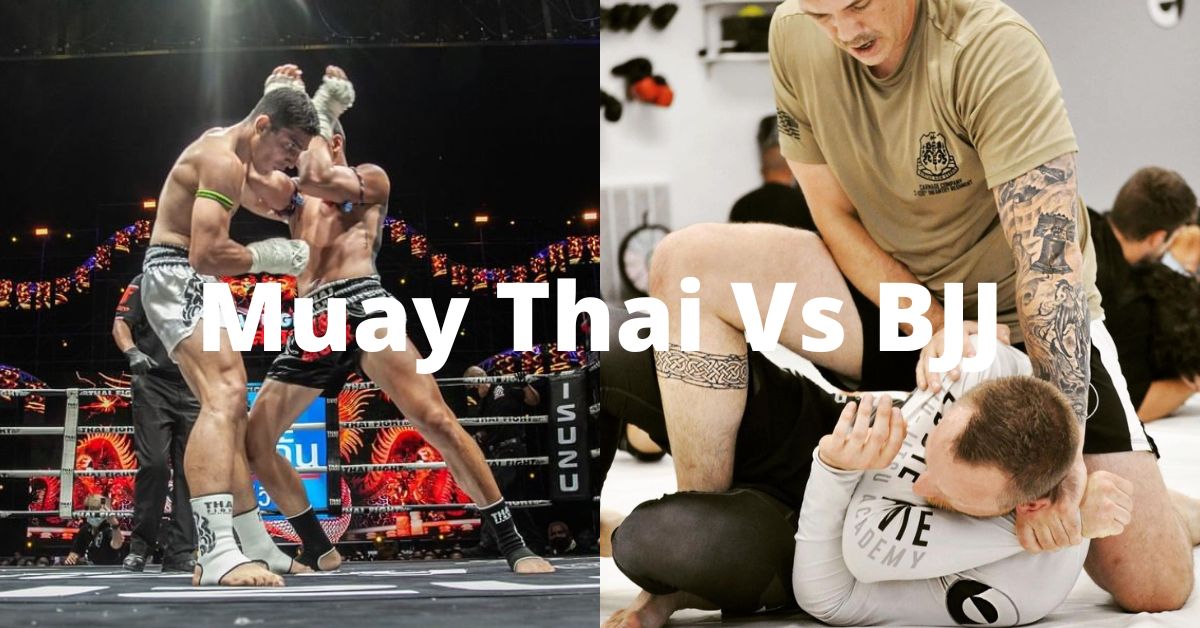 From a glance, one would say that Muay Thai and BJJ are two martial arts with nothing in common. But if you look a little deeper, Muay and BJJ do share a few small similarities.

Let’s put Muay Thai vs BJJ and see how the two different martial arts match up with one another. Going over how they were developed, while also listing their similarities and differences.

The development of Muay Thai vs BJJ

We’ll start out our comparison with the history of each martial art. Both Muay Thai and BJJ have unique stories of how they were developed, which makes them special.

The development of Muay Thai

The sport of Muay Thai began to be developed in the early 1900s, but the techniques used are far older. They are actually more than a thousand years old and were developed when Thailand was known as the kingdom of Siam.

Warriors of Siam were known for their amazing fighting abilities. Using every part of their body as a weapon to strike their enemies.

Before the term Muay Thai was coined, the names used for this fighting style was Muay Boran or Toi Muay. Around the 15th century, Siam warriors that had the best Muay Boran would perform in front of the king.

They would compete in a dirt circle and perform a Wai Kru to entertain the king. This practice continued for centuries until the 19th century when western influence had entered Thailand.

Due to WW1, more westerners began being exposed to Muay Thai. Thai officers would set up exhibition fights to help boost their soldiers morale.

They would even compete against western boxers and French Savate practitioners. Thai’s saw how the sport of boxing was organized, which helped influence the sport of Muay Thai.

Boxing rings would be added, along with boxing gloves, rules, rounds, and a governing body. Muay Thai would become the national sport of Thailand and something that Thai people would take pride in.

Today, Muay Thai is practiced all over the world and the sport is more popular than ever.

The development of BJJ

Brazilian Jiu Jitsu or BJJ for short was created off of the spread of Judo. The creator of Judo, Jigoro Kano sent his best students all over the world to teach his martial art.

One of his students named Mitsuyo Maeda would make his way to the country of Brazil. Maeda or “Conde Coma” as some referred to him as arrived in Brazil during the 1910s.

He befriended businessman and politician Gastao Gracie, who helped him with his immigration process. Gracie also helped Maeda by setting up Judo demonstrations.

Gracie’s oldest son Carlos Gracie attended one of these demonstrations that were held in the city of Belem. Carlos took a great interest in learning this form of grappling and became one of Maeda’s first Brazilian students.

He would learn under Maeda for a few years before he began showing his brother Helio some techniques. The two realized that Judo had a flaw in which smaller practitioners had problems doing the techniques against stronger opponents.

The Gracie brothers began tweaking some of the techniques and began developing their own style. A form of grappling that was more ground-based and gave smaller practitioners a fighting chance against bigger foes.

This would be how the art of Brazilian Jiu Jitsu or BJJ was formed. BJJ practitioners would fight for decades in Brazil in Vale Tudo events to prove the legitimacy of the martial art.

During the early 1990s, BJJ would reach an international audience thanks to the creation of the Ultimate Fighting Championship. A no-holds-barred fighting tournament that was won by BJJ practitioner Royce Gracie three times.

Thanks to the popularity of MMA, BJJ was able to spread across the world and is now taught globally.

The differences between Muay Thai vs BJJ

The biggest and most obvious difference is Muay Thai is a striking art and BJJ is a grappling art. In Muay Thai, the goal is to land a wide variety of devastating strikes on an opponent to incapacitate them. The goal in BJJ is to get your opponent to the ground, control them, and submit them.

Muay Thai is fought from standing

Along with being a striking art, Muay Thai is fought strictly from the feet and only the feet. BJJ does start from standing, but almost all of a BJJ match takes place on the ground.

Muay Thai is a sport

The last obvious difference between Muay Thai and BJJ are the different rule sets of each sport. Another aspect that the two martial arts are completely different in.

The similarities between Muay Thai vs BJJ

Muay Thai and BJJ may seem to have nothing in common, but they do actually have some similarities. Specifically, three similarities that both martial arts share.

Many of the clinching techniques that are taught within Muay Thai are also taught within No-Gi BJJ. (Also wrestling) Since there’s no kimono in No-Gi, most matches will start in the clinch with both grapplers hand fighting. Very similar to the hand fight and clinching battles within Muay, aside from the use of strikes.

Many of the sweeps and trips used within Muay Thai are also used within BJJ. Everything from the knee taps, leg sweeps, and body lock takedown are used in both martial arts to score takedowns.

Who would win in a fight? A Muay Thai fighter or BJJ fighter?

The main consensus is that BJJ will beat most striking martial arts, because they lack ground fighting. A straight BJJ fighter vs a Muay Thai fighter would be a bit more complicated to call.

A good Muay Thai fighter could possibly defend the takedown and land hard strikes from the clinch. Straight BJJ fighters have zero defense against strikes and may crumble if their takedowns are stopped.

Is it beneficial to learn both martial arts?

Yes, it is incredibly beneficial to learn both Muay Thai and BJJ. Whether you are training for MMA or trying to improve your overall self-defense.

For MMA, you need to be proficient at fighting from standing, as well as on the ground. Muay Thai is arguably the best striking martial art in the world and BJJ is one of the best grappling styles.

That is why many of the best MMA fighters in the world spend time training both Muay Thai and BJJ.

Learning both martial arts is also a great idea if you want to boost your self-defense. You can easily defend yourself using strikes from Muay Thai and use BJJ techniques if it goes on the ground.

If you’re serious about learning MMA or self-defense, you should learn both Muay Thai and BJJ.