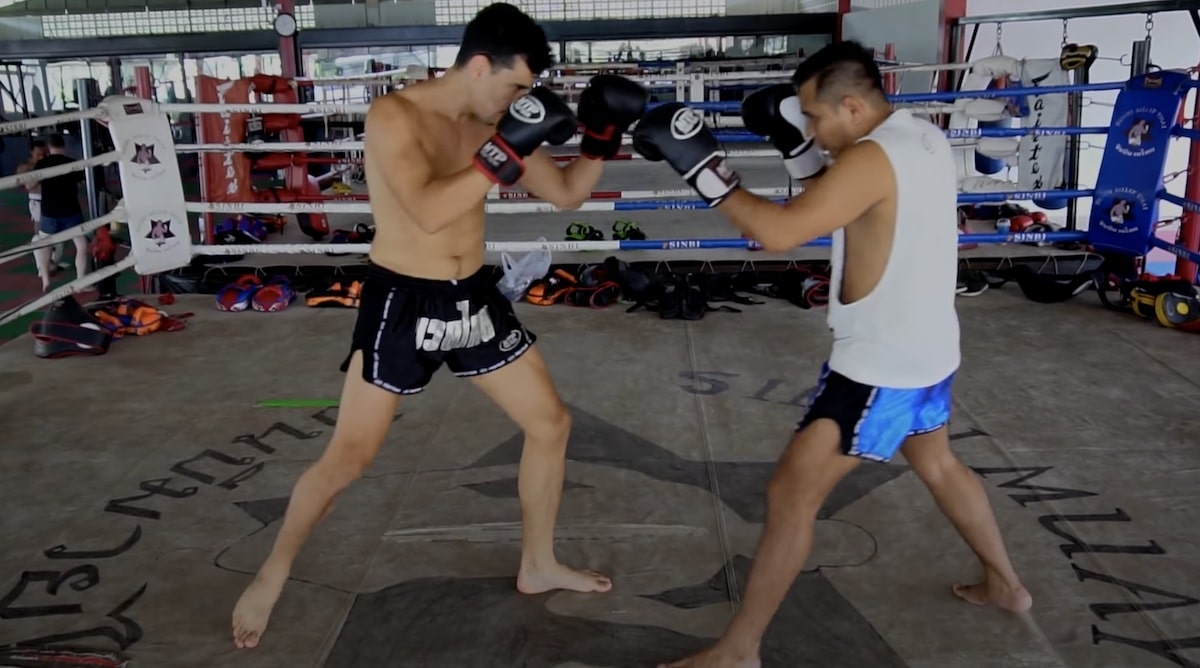 One of the most crucial foundational skills to master while beginning the martial art is the Muay Thai stance. You won’t be able to attack or defend effectively if you are unable to position yourself in the correct way, which will make training difficult, your kick cumbersome and any sparring sessions feel like an uphill battle.

Similar to Western boxing and other martial arts Muay Thai practitioners tend to be either right-handed (orthodox) or left-handed (southpaw) favoring their less dominant side to set up their favored side dominant side for delivering powerful strikes.

The standard foot positioning for the classic Muay Thai stance should aim to keep your feet just wider than your shoulder distance with the lead foot ahead of your center of mass pointing forward with a slight angle away from the body.

The rear foot sitting predominantly under your center of mass at a wider angle with your weight shifting between the two, the distribution of force on the lead foot is even placed throughout the midfoot with the rear foot placing its weight on the ball of the foot, to allow for quicker release of kicks and knees.

The shifting of weight between the lead and rear foot is to create a rhythm for the fighter to enable faster kicks and allow for significantly easier movement of the front foot to allow for quicker checks to defend against incoming kicks.

While this foot placement would be the benchmark for traditional Muay Thai many practitioners throughout the years have adopted different styles like ONE Championship fighter Nong-O Gaiyanghadao, who is known for a much wider foot position to allow him to absorb heavy kicks without having to lose his balance, changing his foot placement during strikes like kicks and teeps to close distance quicker and effectively add range to his strikes.

Moving up from the Feet are the Hips of the fighter. In Muay Thai unlike boxing the fighters hips are to be “square on” with the opponent as opposed to the western boxers “bladed” stance. This serves two purposes, firstly to allow the distribution of weight to shift between the feet easier which allows for quicker kicks and checks while not disrupting the balance of the fighter, additionally, it serves to allow the fighter to rotate the hips more effectively as an enhanced speed to that of a fighter who’s hips are side on.

The foot placement of the Thai fighter will change significantly once they engage in the clinch, the fighter will bring his rear foot up to be inline with his lead foot standing square on with his opponent keeping his hips close, only creating space to knee or sweep, distributing the weight onto the balls of both feet to enable a stronger centre of gravity to reduce the chances of being swept as well as allowing for more weight to be put on the opponent in order to drain them of their energy allowing for openings in their guard to occur so they can land a knee or elbow.

The common misconception of a Muay Thai fighters arm positioning commonly miss-represented in media is that the fighters will have their palms facing forward from their body with arms outstretched with elbows raised to the sides.

This is far from the ideal hand positioning when fighting in Muay Thai. It is essential that regardless of the hand position the fighter’s arms and elbows are close to body, enough so that should any kicks make their way past the defending fighter checks that the blow is absorbed by the arms as opposed to the ribs and the organs they protect.

The traditional Thai stance brings the fighter’s arms up, with their gloved thumbs level with their eyebrows, palms facing each other, in this position the head is protected by the guard, vision not obscured, with the elbows and arms naturally resting below the hands, sitting slightly wider than them protecting the torso.

Of course similar to the foot placement many fighters will adapt from this starting position, often choosing a less tight hand position when at distance to allow for greater vision and mobility to fire off quick kicks and counters. A perfect example of this is the living legend Saenchai P.K. Saenchai who is known for his matador-like fighting style staying at range with lowered hands to bait attacks from his opponents so that he can fire off perfectly timed and often deadly counters.

One of the most difficult parts of the Muay Thai stance to master is the weight distribution. A trained Muay Thai fighter will manage their sifting weight depending on techniques used and what circumstances they find themselves in through the course of their bout, effective weight distribution is essential for the utilization of the many tools at their disposal.

Typically the fighter’s weight will be evenly distributed evenly between the lead and rear foot, shifting between the two depending on attack, defense or technique used. If the fighter should distribute their weight too far forward they run the risk of their opponent seeing this and hammering the lead leg with low kicks for which they will be unable to defend against in time.

Should the weight be on the back foot the fighter will be unable to really fire their strikes off with sufficient power, with punches having to be thrown from the arm rather than from the ground up, additionally, should the fighter’s weight be too far back they will be susceptible to being knocked off balance by a well-timed push kick, body kick or knee.

While the weight is typically distributed evenly while in a neutral position the weight itself will shift depending on the attack of the Muay Thai fighter, with the body leaning forward slightly often with slight lateral movement with power jabs, backwards with the lead leg push kicks and to the side when counter balancing a switch or roundhouse kick.

Once a fighter has mastered the foot, arm and hand placement as well as the weight distribution throughout the many different strikes and defenses they will look to effectively use these tools to benefit their in-ring movement, with the lead foot always preceding the rear foot when moving forward, similarly the rear foot will take the lead when moving backwards, and likewise for left and right lateral movement, this is to minimize the chances of the legs crossing or of the center of mass shifting in one direction or another allowing the fighter to have a sturdy base for both defence and attack even when changing position.

It is common in both boxing and Muay Thai to use this movement to “cut off” the ring from their opponent circling away from the dominant side in order to move away from their power while forcing their opponent to move into a location that the fighter wants, usually a neutral corner so that they have the ability to move in and out to attack and defend while their adversary is unable to do so.

No other current fighter has better footwork and distance management than the great Saenchai P.K. Saenchai however other fighters such as the legends Samart Payakaroon and  Somrak Khamsing who were both renowned for their perfect ring craft and movement during their fights.

The Muay Thai stance starts from the ground up, the martial art’s requirement for fluid balance and movement while remaining ready to defend at any moment while firing off attacks means that the Muay Thai stance has been refined for centuries in order to be able to accommodate these needs.

The influences of western boxing and kick-boxing as well as the relatively recent introduction of mixed martial arts has seen slight changes to Muay Thai across the world with some fighters taking a more bladed stance with lowered guards and wider leg placement like Nong-O, however the fundamentals that flow through every fighters stances and positioning remains ever present when fighting, training and teaching Muay Thai.